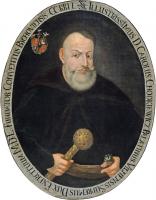 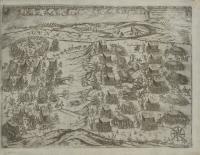 Jan Karol at the Livonian war against the Swedes. The battle of Salaspils (Kircholm) 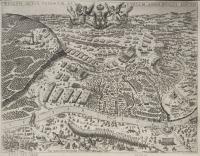 Jan Karol in the war against the Turks. The battle of Khotyn 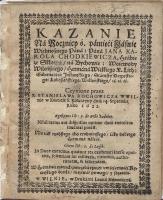 In 1583-1586, Jan Karol with his elder brother Aleksander studied in Vilnius, and in 1586‒1589, at the Jesuit College of Ingolstadt. In early 1590, both the brothers arrived in Padua, where Aleksander entered the university. In the spring of 1596, Jan Karol headed a company that helped the Field Hetman Stanislaw Żółkiewski to suppress a revolt staged by the Cossacks of Severin Nalivaiko. On May 27, 1596, he was appointed the Cupbearer of the Grand Duchy of Lithuania for his courage on the battlefield. Soon after, Chodkiewicz was given an even higher post: on July 19, 1599, he was appointed Elder of Samogitia and entered the Senate, becoming a member of the Council of Lords. In 1601, he became Field Hetman of the Grand Duchy; in 1603, Administrator of Livonia; in 1605, the Grand Hetman; and in 1616, Voivode of Vilnius. Jan Karol was married twice. His first wife was Zofia Mielecka (1566 ar 1567‒1618-11). With her, Jan Karol had two sons, Jan Hieronim Chryzostom (1598-07-15‒1613-07-02) and Kazimierz, and daughter Anna (d. 1625). After Sofia’s death, Jan Karol married Princess Anna Alojza Ostrogska (d. 1654-01-27).

“Congratulatory poem for the illustrious and magnificent Lord Jan Karol Chodkiewicz,.. on his beginning the Eldership of Samogitia etc. etc. under felicitous auspices” by Albertas Skoravecas (Albert Skorawiec) is a short poetic panegyric told by the mouth of Nemunas, the father of Lithuanian rivers. Nemunas, “who is obeyed by the every creek ever furrowing Samogitian fields”, sings praise of Jan Karol to Samogitian river nymphs and bids him to succeed in defending the homeland and driving its enemies far away.

“Image of the memories of the most illustrious lord Hieronim Chryzostom Chodkiewicz who had
inspired the highest hope” is a short piece published in Vilnius by the printing house of Juozapas Karcanas (Józef Karcan) on behalf of students of Vilnius Academy who wished to commemorate the untimely death of Jan Karol’s son, Hieronim Chryzostom (d. 1613-07-02). The publication describes the ceremony in honor of the deceased, including the texts of poems recited during the memorial celebration. It is dedicated to the Grand Hetman of the Grand Duchy, the Elder of Samogitia and Governor of Livonia, Jan Karol Chodkiewicz.

“A sermon for the funeral of the youth of glorious memory, the courteous Lord Hieronim Chryzostom Chodkiewicz, Count of Shklov” was preached by a Bernardine priest, Andrius Gronckis, in the church of the Monastery of Friars Minor in Kretinga on March 18, 1614.  The sermon exalts the Chodkiewicz family, praises the virtues of the deceased and consoles his parents, telling them that the Almighty summoned that very son whom they themselves appointed for God’s service, reminding that good sons may sometimes grow up wicked and stating that God raised the deceased from the despicable earthly world to a higher existence where nobody has to suffer anymore.  The text of the sermon was published by the Mamonich Printing House in Vilnius with the author’s dedication to his benefactor, Jan Karol Chodkiewicz.

In 1615, the Sejm of the Polish-Lithuanian Commonwealth considered a letter from magistrates of Toruń and Gdańsk regarding issues of faith. The official reply was signed by highest officials of the Commonwealth, including the Elder of Samogitia, Jan Karol Chodkiewicz, and the Voivode of Trakai, Aleksander Chodkiewicz.

“A poem in honor of the new Vilnius Palatine, the most illustrious Lord Jan Karol Chodkiewicz” by Jonas Horskis (Jan Horski) commemorates a significant event of Chodkiewicz’s life – granting of the position of Vilnius Voivodeship (on June 28, 1616) and his ceremonial entry into the capital (most probably, on March 25, 1617).  This 299-line poem concerns the events of the half of the year from 1616 fall equinox to the celebration in honor of the new Voivode in Vilnius.

“A sermon for the funeral of the noble and illustrious lady of esteemed memory, the courteous Lady Zofia Mielecka Chodkiewicz, wife to the Voivode of Vilnius” was preached by a Bernardine priest, Andrius Gronckis, in the church of the Monastery of Friars Minor in Kretinga on July 4, 1619. The sermon consoles the husband, daughter, and household of the deceased, and comforts the people who benefited from her kindness, reflecting on the reasons behind human mortality: the envy of the devil, the contradictory nature of man and the will of God (Lat.: statutum est hominibus semel mori, It is appointed unto men once to die). The preacher shows the three spheres where human existence unfolds: the heavenly (where man is immortal), the earthly (where he dies once) and the underground (where he dies  over and over again); he argues that the deceased, who was copiously gifted by virtues, died only once, on Earth, and states that the life of the deceased was very much alike to the Path of the Sun in the Zodiac, as said in Sirach 26:16 “As the sun when it ariseth in the high heaven; so is the beauty of a good wife in the ordering of her house”.  In conclusion, the sermon exalts the Chodkiewicz family, comparing it to the Zodiac, and equaling the virtuous deceased with the Sun that traveled through that Zodiac of the Grand Duchy and eventually reached the heavenly sphere. The text of the sermon was published by the Printing House of the Vilnius Jesuit Society in Vilnius with the author’s dedication to the Voivode of Vilnius, Jan Karol Chodkiewicz.