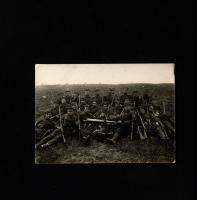 The exhibition “100th Anniversary of the Restored Armed Forces of Lithuania” was run in the Wroblewski Library of the Lithuanian Academy of Sciences from November 6 to 30, 2018. The presentation of the exhibition that occurred on October 22, 2018 featured speeches by such dignitaries as Mr. Audronius Ažubalis, a member of the Committee on Foreign Affairs of the Seimas of the Republic of Lithuania; Col. Darius Petryla, the Director of  the Strategic Communication Department of the Lithuanian Armed Forces, Dr. Stasys Stačiokas, a former judge in the Constitutional Court;  Dr. Valdas Rakutis, Advisor to the Chief of Defense of the Lithuanian Armed Forces; and the historian Dr. Tomas Balkelis.
The last century was full of challenges for Lithuania and its army, requiring much resolve and dedication to achieve hard-won victories.  The historian Dr. Gintautas Surgailis aptly describes the Lithuanian army and its past: “Born amidst fierce fight for Independence, grown-up, thriving, having achieved impressive victories and ascended to the level of a modern army, it was forced to lay arms against the occupants because of a political decision and was liquidated; reborn to fight against the occupants in the forests of Lithuania, obliterated again by an enemy many times stronger, but undefeated and reborn again after the restoration of the independence, the Lithuanian Army is prepared  to carry out all the tasks entrusted by the Government of the Republic of Lithuania, it is ready, when necessary, to defend the freedom and independence of Lithuania”.
Both the physical and virtual exhibition (the latter is larger in scope) features documents from the holdings of the Wroblewski Library of the Lithuanian Academy of Sciences, and the personal archives of Audronius Ažubalis, Rasa Leviškaitė-Sperskiene, and Stasys Stačiokas.
You are very welcome to explore the history of the restored Lithuanian Army as presented by the digital documents at this virtual exhibition.