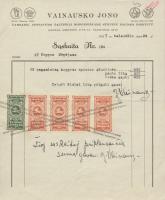 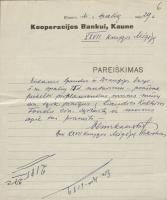 The 27 Book Lovers was a bibliophilic society that existed in Kaunas in 1930-1940.  According to its statute, it aimed to “cultivate the artistic book and make it popular in Lithuania”. The 27 Book Lovers fostered elitist bibliophilia.  It had a fixed number of members (never more than 27), popularized artistically designed books, and produced numbered bibliophilic publications, which became standards of exemplary publishing.  The Book Lovers united people from various professions: Lithuanian army officers, diplomats, lawyers, writers, and scholars.  Bibliophilic societies and clubs existed in various countries across the world and became quite numerous in France, Germany, and Poland in the 1920s.  Therefore, an idea to form a similar club emerged among Lithuanian intellectuals. It was in part prompted by their concern about Lithuanian book publishing and culture, which was still undeveloped at that time.
Why twenty-seven?  Three multiplied by nine is three nines.  As it is the name of a popular Lithuanian spirit, Vytautas Steponaitis playfully proposed to make this number part of the name of the new society.  The Book Lovers had much fun with the symbolic numbers 3 and 9. Three nines were the upper limit for the number of members (during the decade of the society’s existence it had from 15 to 21 members), the term of office for the management board was three years, the anniversary was celebrated after nine years, the registration and bank account numbers ended in 27, the statute and regulations had 27 items each, the meetings took place only on the 27th day of a month.  Vilhelmas Burkevičius summed up the activities of the 27 Book Lovers as follows: “A unique property of this society is its intimacy, a restricted number of members, it is the elite of book aficionados, united by their joint activities and determination to work for the Lithuanian book”.
In addition to bibliophilic publishing (eight books and two sheet publications), the 27 Book Lovers run book exhibitions and tours gave talks on book-studies topics at the society’s meetings. These presentations served as a basis for articles in the Chronicle of the 27 Book Lovers (two volumes came out in for 1933 and 1937; the third volume, slated for publication in 1940, was not completed). The society had its own library, which was being enriched by subscriptions to foreign bibliophilic periodicals and purchases of publications in book studies.
After the Soviet occupation in 1940, the society was dissolved and some of its members suffered repressions. Nevertheless, the bibliophilic ideas spread by the 27 Book Lovers stayed alive, and the society’s contribution to organization of bibliophilic movement, research in book history, and publishing of bibliophilic books made a considerable impact on the development of Lithuanian bibliophilia, book studies and book art.
The exhibition will tell you about society members, their everyday activities, publishing pursuits, and the circumstances of the society’s dissolution. The purpose of this exhibition is to shed light on documents that appear insignificant at first glance (protocols, bills, receipts, invitations, postcards, messages, etc.).  These materials testify to the extremely purposeful, intensive, and interesting life of interwar Kaunas bibliophiles, which they lived by clear rules set by themselves. The exhibits (with a few exceptions) are from the archive of the 27 Book Lovers held by the Manuscript Department of the Wroblewski Library (LMAVB RS F59).  Almost all of them are on display for the first time.  These documents expand and, in some places, revise our view on the panorama of Lithuanian cultural life in the fourth decade of the 20th century.