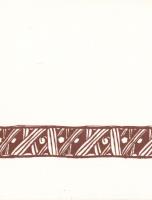 At the University of California, Los Angeles (UCLA)

Theory of the Origin of the Indo-Europeans

Research in the Archaeology of Old Europe

The Journal of Indo-European Studies 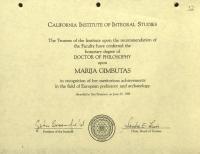 “The Civilization of the Goddess: The World of Old Europe”

Three Stages of the Research Career 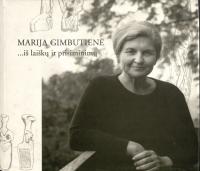 Important Dates in the Life and Career of Marija Gimbutas

1921    Was born in Vilnius on January 23.
1929    Began attending the Vytautas Magnus School in Vilnius.
1931    Entered the third form of Kaunas “Aušra” Girls’ School.
1938    Enrolled at the Faculty of Humanities of Vytautas Magnus University in Kaunas.
1938–1939     Participated in excavations of prehistoric burials in Kaunas.
1940–1942     Began studying the prehistory of Lithuania at the Department of History of the Faculty of Humanities at Vilnius University, later studied archaeology at the Department of Ethnics (archaeology).
1942    Married a chief assistant at the Faculty of Engineering of Vytautas Magnus University, Jurgis Gimbutas. Had three daughters, Danutė (1942), Živilė (1947) and Rasa (1953).
1942    Completed her studies in archaeology, having written a master’s thesis “Modes of Burial in Lithuania in the Iron Age”.
1944    In the fall escaped to the West with her family, temporarily settling in Austria.
1945–1946     Relocated to Tübingen, a city in the French occupation zone in Germany;  furthered her studies in the universities of Tübingen, Heidelberg and Munich, graduated from Tübingen university, received her Ph. D. and published her first book (the doctoral thesis) “Die Bestattung in Litauen in der vorgeschichtlichen Zeit” (“Burial Rites in Lithuania in Prehistoric Times”).
1949    Arrived in the U.S.A. on March 20.
1950–1956 Worked as a research associate at the Department of Eastern Archaeology and Ethnology of the Harvard University’s Faculty of Anthropology, where she pursued further research in archaeology.
1956    Participated for the first time in the International Congress of Anthropological and Ethnological Sciences in Philadelphia.
1960     Was awarded the Outstanding New American Award by the Boston Junior Chamber of Commerce and the World Refugee Committee, visited Lithuania for the first time after emigration.
1961–1963 Was a Fellow of the Center for Advanced Study in the Behavioral Sciences at Stanford University in California, lectured at the Department of Anthropology at Harvard University.
1963     On September 13 was offered a position at the University of California in Los Angeles (UCLA).
1964     Was made Professor of European Archaeology and Indo-European Studies at UCLA.
1966     Served as curator of Old World archaeology at the Cultural History Museum at UCLA, organized an exhibition of Lithuanian ethnic art in the Ethnic Art Gallery of the UCLA.
1967–1968     Carried out excavations at Obre and Butmir, Yugoslavia (present-day Bosnia).
1968    Received The Los Angeles Times Woman of the Year Award, visited her native Vilnius.
1968–1969  Directed excavations at Sitagroi, Greek Macedonia.
1969–1971 Directed excavations at Anza, the Yugoslav Republic of Macedonia (present-day Northern Macedonia).
1973–1974 Was a Fellow of the Netherlands Institute for Advanced Study in the Humanities and Social Sciences.
1973–1975  Carried out excavations near Farsala, Thessaly (Greece).
1975    Was granted the status of Professor Emerita.
1977–1980  Carried out excavations at Scaloria, near Manfredonia, Southeastern Italy.
1979    Organized an international congress held on September 12-17 in Dubrovnik (the former Yugoslavia).
1980–1982     Was President of the Association for the Advancement of Baltic Studies.
1981    On March 5 to June 4 gave lectures at Vilnius University and traveled to Siberia (the former U.S.S.R.) on a Fulbright fellowship.
1986    Visited Vilnius.
1987    In recognition of her research achievements, a collection of studies entitled Proto-Indo-European: The Arhaeology of a Linguistic Problem was published in Washington, D.C.
1988     Was awarded an honorary doctorate by the California Institute of Integral Studies in San Francisco.  Visited Vilnius.
1991     Was elected foreign member of the Lithuanian Academy of Sciences and honorary member of the Lithuanian Association of Archaeologists.
1993     On April 8, received the Annisfield-Wolf Award for her book The Civilization of the Goddess, published in 1991 in San Francisco.
1993     On June 9–26, visited Vilnius, Kaunas, Palanga, and Rambynas.
1993     On June 11, received the degree and regalia of honorary doctor of ethnology at a ceremonial meeting at Vytautas Magnus University in Kaunas.
1994     On January 23, a special collection bearing her name was set up in the Library of the Lithuanian Academy of Sciences.
1994     On February 2 passed away in Los Angeles (U.S.A.), buried in the Petrašiūnai cemetery in Kaunas.